On April 4, 2004, Casey Sheehan, a U.S. army veteran, was killed in combat in the Iraq War. He was 24 years old. His death sparked a chain of events that would galvanize a waning peace movement in the United States led by, of all people, Casey’s mother, Cindy Sheehan.

In June 2004, Sheehan and other military families met with President George W. Bush at Fort Lewis, located in the state of Washington. The families had traveled to Fort Lewis to express their concerns about the War in Iraq. Sheehan later remarked, "We haven't been happy with the way the war has been handled. The President has changed his reasons for being over there every time a reason is proven false or an objective reached."

On August 6th, 2005, upon learning that President Bush was to begin a five-week vacation at his ranch in Texas, Sheehan and six others traveled from California to Crawford, home of the Western White House. After being informed the President would not meet with her, she and her followers created a makeshift camp in a ditch by the side of the road, about three miles from George W. Bush's Prairie Chapel Ranch. Sheehan announced her intention to stay (sleeping in a pup tent at night) until she is granted a face-to-face meeting with the President. A few days later, the media began referring to the makeshift camp as “Camp Casey.”


Cindy Sheehan’s political exploits over the last two years have been well documented. She is, by far, one of the most controversial and polarizing political figures to grace the American landscape since the Viet Nam war era. In late 2005, Sheehan started a national “Bring Them Home Now” bus tour across the country. Many protesters stayed on at Camp Casey to keep the camp open. I first made my way to Camp Casey in mid August 2005, just a couple of weeks after Ms. Sheehan’s arrival in Crawford. By then, the camp had grown from the original seven protesters to a movement of thousands. Land, a large tent, and other supplies were donated and the camp moved from the ditches outside the President’s ranch to a sprawling 4-acre area. People were literally traveling from all over the world to visit Camp Casey and join in the protest against the Iraq War. Cindy Sheehan vowed that Camp Casey would never be closed until the war in Iraq was over. And two years later, Camp Casey is still open and thriving, with protesters still living and meeting on the property.

Back in August of 2005, what I had thought was a one-time assignment quickly became a two-year project. I have made at least a dozen trips to Camp Casey since that fateful day in August 2005 and my intention was not so much to report on the struggling peace movement, but to document the camp itself- the people who came from all over to visit Camp Casey. It was a fascinating gathering- students, housewives, doctors, lawyers, truck drivers, school teachers, people of all colors.... it was a true representation of American society. Many of those that came would eventually stay and live at Camp Casey, as there was a renewed groundswell of support for the peace movement in the United States. Many would make repeated trips to the camp over the next two years to bolster the solidarity of the anti-war movement. On some days, as many as 1,500 to 2,000 people attended Camp Casey, including many members of Congress, long time political and civil rights activists, notable actors, musicians and singers.

However, not everyone agreed with Cindy Sheehan and her growing anti-war peace movement. The small, sleepy, conservative ranching community of Crawford, population 1,100, became the unwilling center of the peace movement in the country. Public opinion in Crawford was decisively against Cindy Sheehan.and her followers. This sentiment was echoed by thousands of citizens all over the United States. Death threats and bomb scares became commonplace events at Camp Casey.

From the very beginning, caretakers Gerry Fonseca and Carl Rising-Moore have been continuously living on the property. On special occasions, events and peace rallies were held at Camp Casey, usually to coincide with planned visits by President Bush to his ranch.

The pinnacle for Camp Casey came at the Easter weekend rally held there in 2006. Thousands of people made the pilgrimage to Camp Casey including many well-known peace and civil rights activists, icluding Rev. Joseph E. Lowery and Daniel Ellsberg.

In July 2006, Cindy Sheehan decided that Camp Casey needed a more permanent and easily accessible location. No one in Crawford would sell property to Ms. Sheehan so Gerry Fonseca, acting as her agent, purchased 5 acres of land approximately half a mile from downtown Crawford. She used the military insurance money from Casey’s death to buy the land. Cindy Sheehan was now a property owning, tax paying citizen of Crawford, Texas just like George W. Bush. This would be the final move for Camp Casey.

In May 2007, Cindy Sheehan released an open letter to the American people in which she announced that she was quitting the peace movement. "I am going to go home and be a mother to my surviving children and try to regain some of what I have lost.” She announced that Camp Casey was up for sale. This sent shock waves throughout the anti-war movement.

On June 14, 2007, in an exclusive one-on-one interview, I met with Ms. Sheehan at Camp Casey and asked about her shocking decision to step away from the peace movement that she helped start. It was a tired and extremely bitter Cindy Sheehan I met that day. She explained to me that after the November 7, 2006 elections in which the Democratic Party took control of both the House and the Senate, everyone thought the tide had turned against support for the war and the troops would be home soon. “They used the peace movement to help them gain power and nothing has changed,” she said. “We helped get them elected and they have turned their backs on the people and our brave soldiers. Nothing has changed. It is still the same old story. “ Ms. Sheehan was particularly despondent over the fact that Speaker of the House, Nancy Pelosi, had removed from the Senate floor a bill calling for the impeachment of the President of the United States. “Nancy Pelosi promised so much and did not deliver on anything,” Ms. Sheehan said. “The peace movement has been betrayed by Pelosi and the Democrats and I am tired of fighting the battle.” Sheehan acknowledged that Camp Casey was indeed up for sale. “I’m tired,” she said. “I’ve traveled the world these last 18 months spreading the message of peace. And I honestly can’t tell if it has made a difference.” She then told me that she was planning one last rally for early July. “I want all of the wonderful people who have been supporting me and Camp Casey to come back for one last reunion- a last hurrah, if you will, for Camp Casey.”

This last rally was scheduled for the weekend of July 6th. Just a few days after my June 14th interview with Cindy Sheehan, she announced, live on Bree Walker’s Los Angeles radio talk show, that Camp Casey had been sold. In fact, it was revealed that Bree Walker, herself, had bought the property. Bree Walker is a well-known radio personality and fervent anti-war activist. Both women then announced that Ms. Walker would be attending the rally in July for a ceremonial deed transfer.

Starting July 6th, hundreds of protesters began arriving in Crawford for what many felt would be the last big rally at Camp Casey. Ms. Walker’s plans for Camp Casey are not exactly clear but she hopes to keep it up and running for now and to eventually perhaps turn the site into a peace learning center and a playground for the children of Crawford. Carl Rising-Moore will stay on as the lone caretaker.

On Friday night, July 6, Gerry Fonseca spotted me in the crowd and told me to make sure I was around the main stage that evening because Ms. Sheehan would be making a major announcement. I expected the announcement to be about the sale of the camp. I was wrong. At approximately 7:00 that evening, Cindy Sheehan took the stage. Fighting back tears, Ms. Sheehan announced, “ I know a lot of you thought this was over. That when I quit, I was just going to ride off into the sunset. But you know me, I get bored easily and well, I can’t just sit back and watch as the Democrats take the issue of impeaching the President off the table. There is too much at risk. So I am announcing that if the impeachment issue is not put back on the table by July 23, then I am running for Congress in 2008, in California’s 8th Congressional District. I am going to run against Nancy Pelosi in her home district.”


Update:
Nancy Pelosi defeated Cindy Sheehan in her bid for Congress. Sheehan came in second in a a field of seven candidates.


In August 2012, Roseanne Barr named Cindy Sheehan as her vice presidential running mate on the Peace and Freedom Party ticket.

To view a slideshow with a soundtrack, please visit Slides. 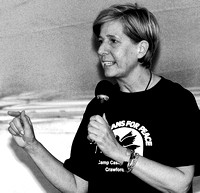 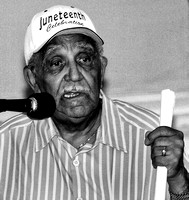 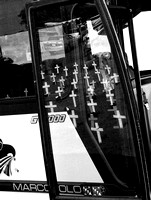 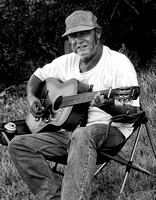